You are here: Home / For Sale / Witty Luterra C 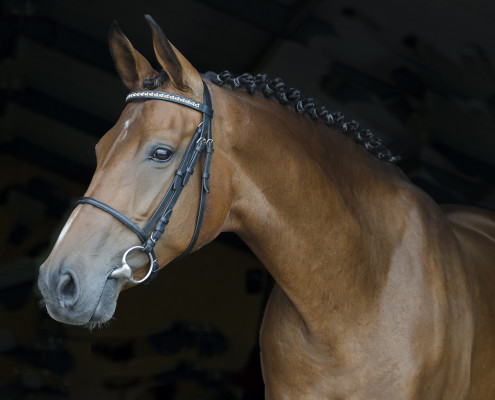 Witty has been very successful. Both in her own career as her offspring. Witty Luterra C participated in the National Foal Show. She has her Ster-predicate with: 80 points for exterior -jumping 75 points. Her first foal was an immediate hit. Ditty Dante C participated in the National Foal Show, the National Mare Show at 3 years old and she is an Elite-mare. Her first foal V. Numero Uno is sold for a nice amount at the Foal Auction Prinsjesdag. The descendants of Witty are often selected for foal auctions.

For example, in 2013 her colt by Chacco Blue is selected for the Foal Auction Prinsjesdag (one of the top auctions in Holland). Three brothers/sisters Vitty are Grand Prix show jumpers. In addition a brother is an international show jumper and champion of the KWPN Stallion Show. Her oldest brother is an approved stallion. Her youngest brother was sold in November 2012 for 140.000 euros at the auction of Holger Hetzel. 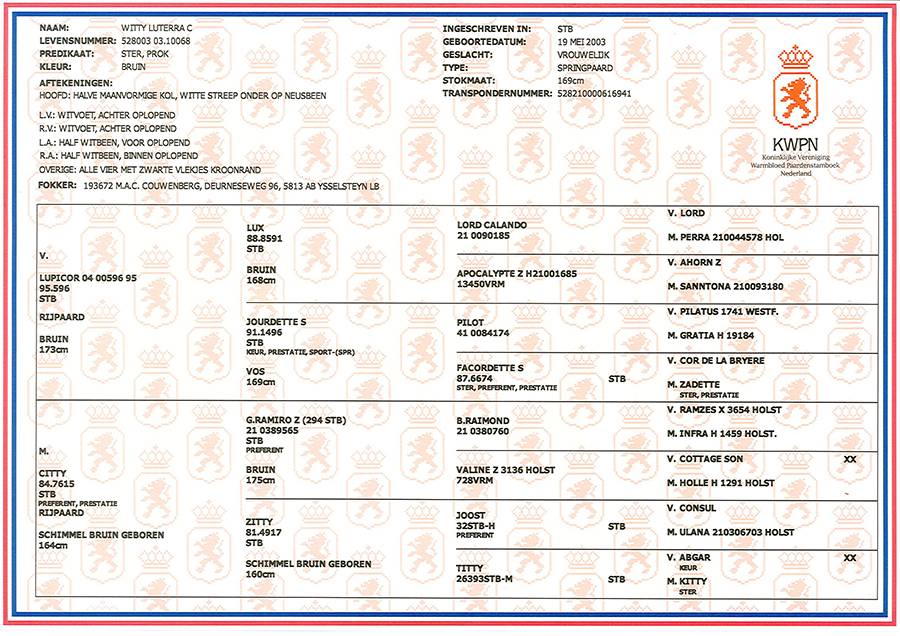 A mare with a good track record, especially considering her young age. As a foal she was reserve champion of Limburg show jumper foals. She was in the finals placed 11th at the National Foal Show in Ermelo on the 11th. At age 3 she was 2nd in the Limburg-cup. She earned 80 points for her exterior and 80 points for jumping (even 85 for scope). At the National Mare Show she was in 5th place in her group.

Her first foal was an immediate hit. Highlander C (F. Numero Uno) is auctioned at the Foal Auction Prinsjesdag and boought by Jos Althuyzen and Egbert Schep. He has become in 2015 KWPN approved! Her second foal is auctioned at the Elite Foal Auction Borculo in 2014 to the VDL Stud. Jayblue Citty C (F. Zirocco Blue) belonged to the top foals of this auction. Her 3rd son is Lowland Citty C by Zirocco Blue, champion KWPN foals Limburg, top 15 showjumper foals of Holland – sold to VDL Stud.

2009 Sold as a foal at the Limburg Foal Auction to the Bergmans family. He is now trained to be a show jumper. There are high expectations of him.

2011 Sold as a foal at the Foal Auction Brabant.

This colt is selected for the Foal Auction Prinsjesdag and will be auctioned on September 17, 2013 in Ermelo.

The genetically interesting Jitty Kanterra will not be sold, she becomes a future broodmare.

2017 Unfortunately the foal by Stakkato Gold has passed away